Borderless working – the emergence of co-working

Arrival of a new work culture

In Berlin, about 10 years ago, believers of a different working culture began turning their visions into actions. These guys aimed for personal fulfillment, a self-steered work-life balance, and a lot of flexibility that enabled them to move away from a 9-5 employment contract over to autonomous occupation.

Born out of the technological development and the rise of the internet, this new working culture needed a space that could facilitate these flexible ways of working. The basic equation entailed a great WI-FI connection, a few desks to work on and a proper coffee machine, which equaled to the new working culture named ‘co-working’.

Betahaus and St. Oberholz, which was already operating as a famous café for 6 years, were the first two co-working concepts born. Today, Berlin facilitates next to these two original concepts many other co-working spaces. Even though the term co-working seems to be in every Berliner’s mind, these modern work spaces only accumulate about 0.2% of the total office market in Berlin and therefore resemble a niche product. Nevertheless, the co-working concept of today is setting the path of how the future work culture will look like. 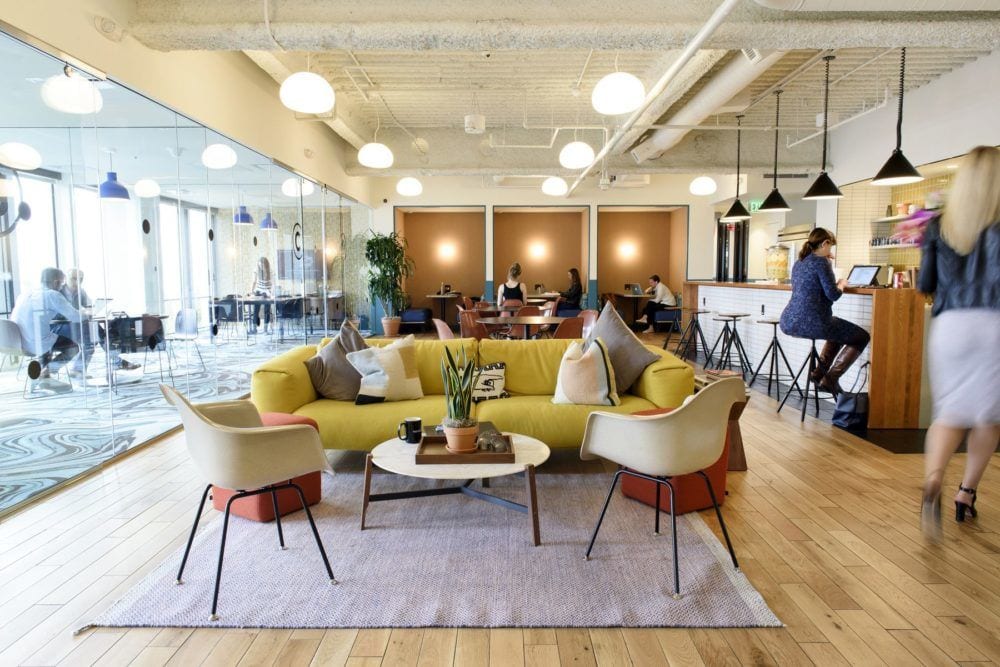 Their aspirations for a modern work space came from different reasons. While in Berlin office rental costs were cheap, New York’s freelancers were fighting for affordable office space. WeWork understood this market demand for efficient office management and created the sector’s most successful business model. Today the firm is operating over 930.000 m2, and is valued at over 20 Billion US Dollar.

WeWork leases large office buildings, manages them, and offers a full-service office concept to start-ups and larger corporations. It perfectionated its ‘software’ and has therefore become the preferred service provider for workspace.

Today, the two movements between Germany and New York target different markets. While Germany’s co-working concepts still target the traditional freelancers and primarily offer flexible work desks, WeWork offers full service office space primarily consisting out of dedicated offices. They target start-ups and established cooperations, who have jumped on the co-working bandwagon to get their teams in contact with the young-vibrant start-up scene.

The co-working culture will further be enhanced by the rising number of freelancers worldwide. The World Economic Forum and American Freelancers Union predict that by 2027, the majority of the US workforce will freelance. Currently, the youngest workforce, is already setting an example as almost every second millennial is freelancing. As this emerging lifestyle needs to be catered with a space to work, co-working spaces offer an optimum solution to that problem.

Jonathan Humphries and the HoCoSo team are strong believers of a flexible working culture. The company culture fully supports the team members’ self-fulfillment and encourages them to work and live out of the city of their choice. Part of HoCoSo’steam is based out of Berlin, London and Beirut, while HoCoSo’s headquarters remain in Zurich.

Hotel Analyst Intern, Camiel Verhoofstad, and Concept Development Coordinator, Kilian Vollbach, primarily work out of the St. Oberholz co-working space in Berlin and commute to Switzerland for monthly team meetings or travel to other project destinations.

The rest of the work and communication is done online. Camiel describes this working lifestyle as ‘being able to work in the city you want to live in and work for the company you want to work for, is one of the biggest assets to this position. HoCoSo understands that fulfilling personal desires can exhilarate the professional productivity.’

The potential for the hospitality industry

Derived from the personal attachment to the co-working concept and culture, HoCoSo strongly believes that the hospitality sector can benefit from these modern work space developments. To discuss this potential, HoCoSo is inviting its clients and network to its very first networking event. Under the theme ‘borderless working -the emergence of co-working’ the HoCoSo and St. Oberholz teams are looking forward to discussing the potential of bringing the two sectors closer together.

For more information on the networking event please contact: info@hocoso.com.