Jonathan Humphries is in conversation with Alphy Johnson, a legend within the hospitality industry. He has had an incredible career and now heads his own consultancy International Hospitality Advisor.

This is the third episode in the series of “Leadership through crisis”. The opportunity to have a conversation with Alphy Johnson about some of the crisis that he has faced in his career is invaluable. He describes himself as the humble Inn keeper which is really not a true reflection of the amount of responsibility and ability that he has shown. In Part 1, Alphy described his experience in the US during the San Francisco earthquake and the Los Angeles riots. In Part 2, he spoke of his time in Indonesia at the time the country was hit by a financial crisis. Now, in Part 3, he reveals details from one of his most shocking experiences from while he was in Saudi Arabia, under Al Qaeda attack, in 2003.

Alphy Johnson is a great example of leadership. He combines calmness, focus and action, wisdom and humility and reacts in an exemplary way during time of crisis.

In this episode, Alphy takes us to Jakarta in the midst of a financial crisis. He remained collected throughout the experience with his calm and focused approach. 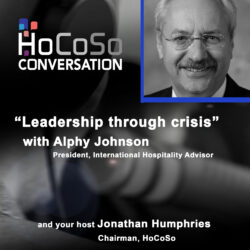 In this episode,  Alphy talks about his time during the San Francisco earthquakes and the Los Angeles riots. They are two events that are marked in history as major crisis that had significant impact on the community, the city, and the tourism sector in a way that it took time for these markets to recover and for the people to recover.

>> Go back to HoCoSo CONVERSATION